Kim Kardashian seems trying really hard to get her voice heard these days. First with all those comments about being personally offended by critics who slammed Jessica Simpson’s weight, and now, with a random blog about how she’s absolutely not on Facebook people. 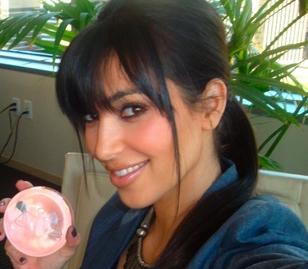 She continued: “I am so sick of people saying I got engaged because my Facebook profile says so, or I’m single now because my Facebook says so! Call me old school but I love MySpace and I used to love Friendster! Maybe I need to get a Facebook account to shut down all of these fakes!”

Fair enough Kim, fair enough. A source who claims the reality t.v. star actually does have a Facebook account. A former high school classmate of Kim revealed that she was “friend requested” by the Keeping Up With The Kardashians star, and has several other Marymount High School alums listed as friends.

The source said: “Her name is listed as “Kimmy” on her page and it doesn’t say she’s single or engaged. There’s one picture posted and it’s an old one from a dance with a bunch of us from high school. If the page was fake, how could she have friend requested me?”