Lindsay Lohan became the cover girl of Marie Claire magazine for its October issue. In Hollywood, a tattoo is worth a thousand words. So even though the actress remains coy about her relationship with deejay Samantha Ronson, their matching tattoos say it all. 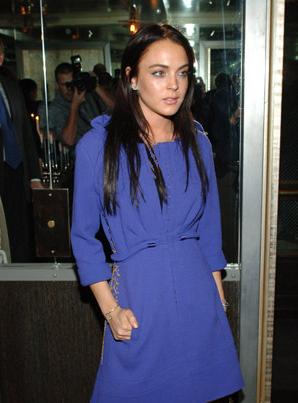 The “Freaky Friday” actress explained her star tattoo on her hand, saying: “Samantha [Ronson] has a bunch of stars, so I got that.” Then, pointing to a little heart, she says, “she got this.”

The actress, who suggests that Samantha Ronson has been a positive force in her life, continued: “I’m really happy. She’s a great person. And she’s a great influence on people around her. But I think that anything that’s changed [in] my life is because of me. I’ve gone through it, and I’ve learned to deal with it and I’ve made the decision to move forward.”

Now, Lindsay Lohan has plenty to look forward to. With her next film, “Labor Pains”, which is expected in 2009, the actress, who has been living with Ronson since May, indicated to Marie Claire that she is looking to buy a new home “with someone.” Could it be the “someone” with the matching tattoo? Lindsay Lohan won’t say.

Also on the horizon for the actress/singer: getting back to the recording studio. The actress added: “This business is very ‘go, go, go,’ and you’re constantly surrounded by people, and then everything stops. So you can feel invalid in a weird way. I find [the recording studio] therapeutic.”