Michael Buble admitted that he “curled up in a ball and cried” after he split from Emily Blunt. 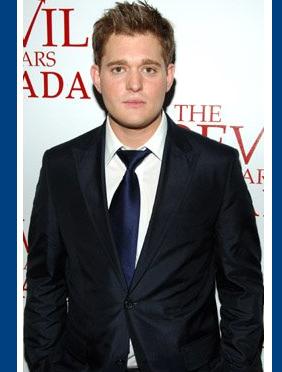 The 33-year-old singer, who ended three-year relationship with the British actress ended earlier this year in the midst of the rumors of his infidelity, has revealed he is still struggling to deal with the break-up.

The multi-platinum singer said: “I’ll go home and I’ll curl up in a ball and I’ll cry. I’m not kidding. I’ll just cry.”

Michael Buble insisted that Emily Blunt is “an amazing” person, and blames their hectic work schedules for the failure of their relationship, revealing: “Emily was a substantial person and amazing still. In my business it’s tough to go out with another artist because you’re never together. You’re lucky if you can see the person once every two to three months, and with Emily, she was on her movies and I was doing my thing so it made it more difficult.”

The singer is currently looking for a new girlfriend and has a definite idea of the qualities his new love must have. He added: “I don’t want a pushover. I want a strong human being that doesn’t put up with my bulls**t. It turns me on actually.”