Michelle Obama gave the kind of intimate, emotional endorsement only a wife could give in her headlining speech kicking off the Democratic National Convention on Monday night. 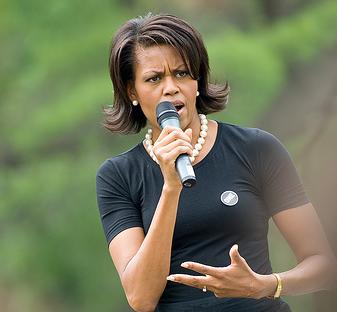 She recalled her husband, Barack Obama, as a nervous new dad, before the hype and hoopla of his life on the national stage, and said he has not been changed by politics.

The wife of the presidential candidate revealed: “He’s the same man who drove me and our new baby daughter home from the hospital 10 years ago this summer inching along at a snail’s pace, peering anxiously at us in the rearview mirror, feeling the whole weight of her future in his hands … [He was] determined to give her what he never had, the affirming embrace of a father’s love.”

At the start of a four-day gathering that will culminate in her husband receiving the Democratic nomination for president, Michelle, 44, remembered the long, hard-fought primary season.
She explained: “After all that’s happened these past 19 months, see, the Barack Obama I know today is the same man I fell in love with 19 years ago.”

Michelle Obama commanded the stage in her form-fitting turquoise sheath by Chicago-based designer (and Obama friend) Maria Pinto. Actress Kerry Washington was in the convention hall for Michelle’s speech, calling her the new Jackie O. “I’m really excited about all of us emulating her – not only in her style but in her grace,” said the Ray actress, who campaigned for Barack Obama in nine states during the Democratic primaries.

After Michelle’s speech ended, daughters Sasha, 7, and Malia, 10, joined her as Stevie Wonder’s song “Isn’t She Lovely” played over the loudspeakers.

Barack Obama himself made an appearance live via satellite from a campaign stop in Kansas City, Mo. to praise his wife.

From the stage, the couple’s daughters called out “I love you, Daddy” as the family wished each other good night.