Don’t let the tats or threats against two thirds of the Jonas Brothers fool you—Trace Cyrus, the 20-year-old Metro Station guitarist and singer, is almost as family-friendly as his half-sister Miley and dad Billy Ray. 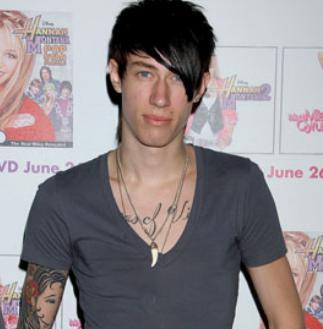 But you idolize bands like Guns N’ Roses and Mötley Crüe, and you party in ways pop acts like the Jonas Brothers couldn’t.
“I’m not trying to clean my image to make anyone happy. I could have gone the route of the Jonas Brothers. Those guys can’t live their lives freely. They have to put out this image that’s totally fake.”

Which Jonas Brother would be the toughest to take in a fight?
“I don’t think any of them would be much trouble. I’d never lay a hand on Nick—I love that kid—but the other two better not get in my way.”

What’s the dumbest, most rock-and-roll thing you’ve done?
“There’s been a few incidents, man. We got pulled over once, and the police ripped out all our stuff and searched the van.”

Was there anything for them to find?
“Yeah. There was another band riding with us. They had some, uh, stuff.”

Always blame it on the other band.
“Yeah, it sucked. And when I was 16 and still living in Tennessee, me and some friends were driving around and pulled a fake pellet gun on some girls. The next day we were called out of school and taken down to the police station. My mom was in California with Miley, auditioning for Hannah Montana, and my dad was filming a TV show in Canada—they were so pissed. I always did stupid stuff as a kid—you know, you feel like you can live forever. But I’m 20 now. I want to keep a clear head. I can’t do that stuff anymore.”

Is that tattoo on your hand a picture of your dad?
“No, it’s Geronimo—my dad would be way too creepy.”

Do you get mad when people make jokes about “Achy Breaky Heart”?
“We’ve always been respectful of that song. It started off the Cyrus legacy. Honestly, I have the coolest mom and dad in the world—they let me go out and act crazy and get tattoos all over my body and face, and they still love me like they did when I was 5. The more success you have, the more people are going to hate on you—you have to let it roll off your shoulders.”

Do you remember when things weren’t so good for your dad, careerwise?
“Yeah, dude, I remember—I remember I used to get, like, so depressed and sad, because I’ve always been my dad’s biggest musical fan. I’ve seen his career go from the highest of highs to the lowest of lows and back up. He’s had so many songs over the years that I think have just been smash hits, and it kills me that these songs don’t even get radio airplay.”

What’s the best advice you’ve been given?
“Tom Delonge from Blink-182 told me not to sleep with too many nasty girls on the road.”

What’s the worst?
“Probably the same.”

How would Metro Station’s path be different if it were 1989 instead of 2009?
“I think we would have been bigger quicker—music was more accepting back then. When I go overseas, everyone is so open to all types of bands, but here everyone has their mind set on whatever the radio’s playing at the time. It’s a scary time in music, but, you know, it’s not impossible to conquer it.”

Those bands in the eighties got away with murder, too.
“Yeah. You really have to watch what you do nowadays—everywhere you go, someone has a camera taping what you do. But this is the life I chose, so I really can’t complain too much.”

You’ve watched music careers come and go. How do you plan to make yours last?
“The only way to protect yourself is to kill people with kindness. People have this idea of what I’m like by looking at me, and I like shocking them by showing them I’m a good guy.”

So nice is the new shocking?
“I guess so. I’m a very respectful young man.”

You’ll still trash a hotel room, won’t you?
“Oh, I’ll break a hotel room. But then I’ll pay for it after.”