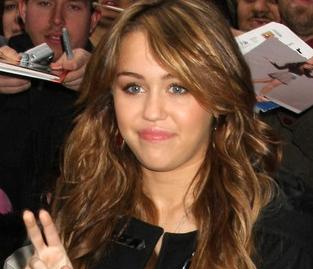 In the new movie she makes a trip home to Tennessee after fame and fortune have gone to her head.

She was asked by the readers, who contribute questions to an interview with Cyrus.

Do you think that this next season of “Hannah Montana” will be your last? “I’m working on Nicolas Sparks’ film that’s coming out probably later on next year. And this isn’t necessarily the end of “Hannah Montana,” but it’s not for me to say. It’s whether Disney wants to do more.”

How is working with your dad? (Her father Billy Ray Cyrus also portrays her fictional father on the show and in the movie.) “He’s a good dad. He’s one of the most fun people to hang out with, so if I were going to work with anyone from my family, it would be my dad, for sure.”

What is it like being a star and handling hypoglycemia? “I get really low blood sugar all the time. So it’s really hard when you’re on tour and you are feeling sick. And I also have a heart condition that’s called tachycardia, but I’ll grow out of it most likely. But it’s hard for me to even run up and down stairs sometimes … But it’s about taking care of yourself.”

Do you ever wonder why so many people think they have the right to judge you just for living your life and having fun? “You know, I think it’s a part of being in the spotlight. And it’s something that’s not fun, and you don’t necessarily like. And sometimes you just wish that some people would have to deal with it to understand it, but they won’t. And it’s just something you’ve got to understand, and you’ve got to use class about it and be smart in the way that you live.”

What are your political preferences and some of the things that you take a stance on besides global warming? “I try to stay out of it as much as possible. They always say don’t talk about politics, religion, whatever. And the one thing that I talk about a lot is my faith. So I try to keep politics out of it and what not, but I am very into just like the whole taking care of the environment and everything.”