Princess Eugenie has been caught pursuing another activity which might make her grandmother frown. 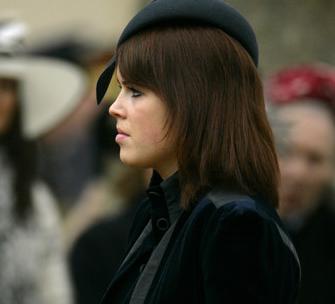 The youngest daughter of Prince Andrew and Sarah, Duchess of York, was pictured puffing on a cigarette as she wandered around Sydney yesterday, accompanied by her Scotland Yard bodyguard.

Eugenie, who celebrated her 19th birthday last week, is on a gap-year holiday in Australia with friends after achieving two As and a B in her A-levels (making her the brainiest member of the Royal Family, incidentally).

She returns in the autumn to study history of art at university.

Despite some unseasonably atrocious weather, the young royal – who has already enjoyed trips to China and India in recent months – spent the morning wandering around Sydney’s historic Rocks district dressed in a hoodie.

According to onlookers she frequently pulled a packet of cigarettes out of her bag and lit one up. ‘She wasn’t chain smoking but she is clearly more than just a social smoker,’ said one.

At one point, the rain was so bad the group took refuge in a cafe prompting Eugenie, who is sixth in line to the throne, to spark up again.

Although she has been a smoker for some time, it is the first time that the princess has ever been seen with a cigarette in her hand.

Friends say she has vowed on several occasions to try and quit.