Rihanna was sporting a new tattoo, which indicated “Rebelle Fleur” across the left side her neck. 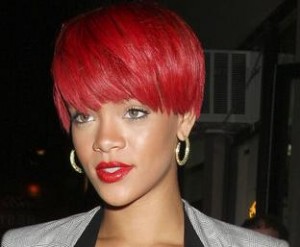 The “Umbrella” singer was spotted as she left her New York City hotel on Tuesday. Her new tattoo, which added to her existing tattoos, means “Rebel Flower” in French.

Meanwhile, Rihanna, who was sporting a bright red hairdo, was also spotted at a restaurant in Soho, New York.