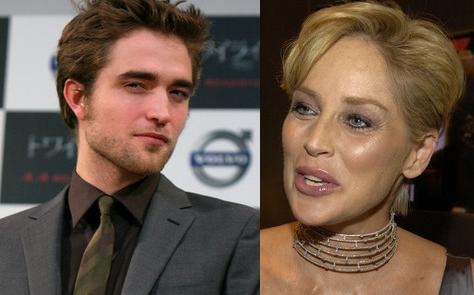 Though he is busy filming several movies, Robert Pattinson spends some time doing his part for charity. Recently, the 23-year-old hottie was seen teaming up with senior actress Sharon Stone to sell a picture of pop superstar Madonna for $45,000.

In related news, Robert Pattinson lately was reported hooking up with Los Angeles’ resident Erika Dutra. The twosome was seen canoodling at the amfAR’s Cinema Against AIDS 2009 benefit at the Hotel du Cap-Eden-Roc in Antibes, France.

“Erika was introduced to Robert by a mutual friend at the beginning of the night and he was smitten with her from that point on,” a source said of the pair. “He took pictures of her, sat with her all night, and the two of them were even seen kissing! There was serious chemistry between them, and they looked like they were having an amazing time. Erika and Robert even left the party together!”

Aside from his personal life, Robert Pattinson currently is reprising his role as Edward Cullen on “The Twilight Saga’s New Moon”. He is scheduled to fly to Italy at the end of the month to film the movie. As of late, Pattinson has reached the final deal to star on “The Twilight Saga: Breaking Dawn”, the fourth and final installment of the vampire drama film series.