Uma Thurman, who has graced the cover of “In Style” magazine, proves to have something as In Style’s down-to-earth cover girl as she talked about fashion, aging, and the paparazzi. 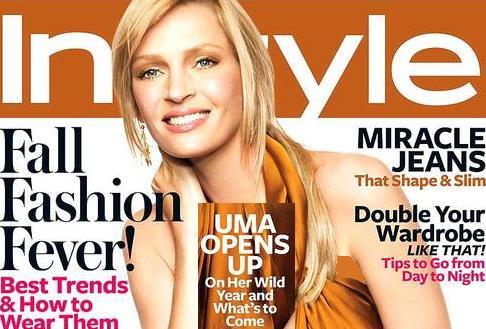 Here are some of the details of her interview:

On fashion vs. style, Uma Thurman revealed: “Fashion is the machine that drives the business. Style, on the other hand, is an unconscious gift that money can’t buy. It’s being comfortable not only in your clothes but in your own skin. I’ve always admired how European women have such effortless style, as though they’ve been culturally raised to wear clothes gracefully and effortlessly. There’s something wrong about trying too hard to be fashionable. When people are too ‘outfitted,’ it comes across as self-conscious.”

On her taste in clothes, “My Super Ex-Girlfriend” star explained: “It has changed over the years. I used to be a bit more devil-may-care — more wild and hippie. I have always been attracted to beautiful — and beautifully made — things, but I prefer comfortable, simple clothes. I don’t want to wear something that makes me feel tortured, overexposed or uptight. I try to find the perfect balance between being hemmed in by clothes and being set free by them.”

On stardom, the actress shared: “Being a celebrity is one of the fringe aspects of my job and one I’ve been tutored in, so to speak. I’ve learned how to use it in a positive way and benefited from the brush with fame I had in my teens. I got used to things slowly, rather than having a transcendent moment. Either way it’s important to be clearheaded and not to let fame become toxic.”

On paparazzi, the actress said: “They can definitely be annoying, but at the end of the day these photographers are just doing their job, one they probably never imagined they would have. Still, I’m sometimes confused by what they choose to photograph. On the set of ‘Motherhood,’ I was in a hippie floral dress and Birkenstocks. I can’t imagine who would be interested in seeing me like that, and yet they photographed me in that same dress every day for over a month!”

On aging, she said: “For an actress, every developmental stage is a culling of the herd. New people are found and pushed to the forefront. It makes it easier having gone through working as a teenager and being told that there would be no career for me as a 20-year-old. And then working as a 20-year-old and being told that was it. And then having children and being told there wouldn’t be a career for me now. I feel fortunate to have been able to have a creative life during all those different periods. And the characters I get to play as a mature woman are so much more interesting than the ingenues I got to play as a kid, so I feel okay about it.”

On her looks, she added: “It’s the same with all actresses. Whether it’s their beautiful long, wavy hair or their extraordinary lips or their sparkling green eyes or warm laugh, they’re pegged to some physical attribute. I think the important thing is not to think of it as blessing or a curse, and to deal with it and have a mechanism for managing. Obviously, if I looked distinctly different I would have a different kind of career and have different kinds of challenges. But there are plenty of challenges that come from being a tall girl. Nobody would have thought I would have a 20-year career in front of me when I started!”