Jetting out of town ahead of the Memorial Day holiday weekend, Zac Efron and Vanessa Hudgens were spotted at LAX Airport in Los Angeles, California on Friday (May 22). 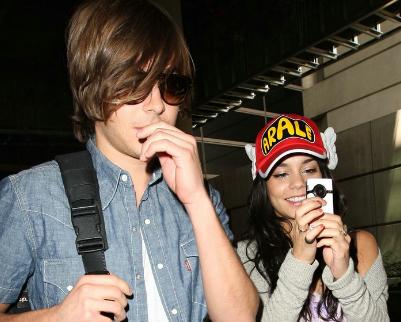 Looking quite fashionable in a Dr.Slump ARALE Chan Angel Wings hat, Miss Hudgens snapped up shots with her camera as the two passed by paparazzi on the way tot he security checkpoint.

And while the “High School Musical” co-star lovers are spending the long weekend out of town, Zac has already scheduled his plans for next weekend – as he’ll be presenting an award to Ben Stiller at the 2009 MTV Movie Awards.

As previously reported, Stiller will be receiving MTV’s Generation Award, of which the “Night at the Museum” funnyman told press: “I am honored to be getting the ‘Generation Award. I was given my first show at MTV, and also canceled for the first time. I also was secretly having an affair with JJ Jackson, so it brings back pleasant memories.”