An impeccably waxed Sacha Baron Cohen poses as Bruno on the cover of the July GQ. Look familiar? He is striking the same pose as Jennifer Aniston did in January, when she posed for the magazine in nothing but a Brooks Brothers necktie. 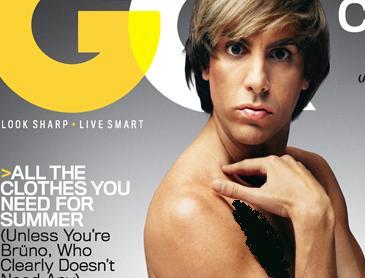 Inside the Austrian fashionista dispenses style advice. Here are the highlights of the interview:

On forced to choose: Dolce or Gabbana?
Gabbana. Dolce is bald, so zere’s no hair to grab hold of.

Can men wear heels? When and why?
Of course. Some guys look great in heels—ze singer Pink, for example. Alzo, mein last boyfreund, Diesel, vas a genuine Pygmy only three eight, so ich made him vear heels so he could give me plow jops mitout me having to bend mein knees.

On where to store an iPhone:
Vhat ein stupid question. Keep it in your assistant’s pocket, obwiously.

On the President’s style:
Firstly, ich vant to say zat I find Obama an inspiration–it gives me great hope zat, after years of struggle, someone can at last get to ze White House, despite being incredibly hot. On ze other hand, it’s slightly disappointing that he needed zat beard, Michelle, to help him–but vone shtep at a time.

On groom’s attire for a heterosexual wedding:
If Brüno vas about to be married to a voman, I’d be vearing a noose.

On other best-dressed world leaders of all time?
JFK. Obama. Castro. Timberlake.

His feeling on getting your teeth professionally whitened:
If people vant to pay for it—zat’s up to zem. Personally, ich have never had to pay for it, und ich prefer it on ze chest to ze mouth, anyvay.