Jade Goody, the 27-year-old reality television star who was suffering from cervical cancer has died. 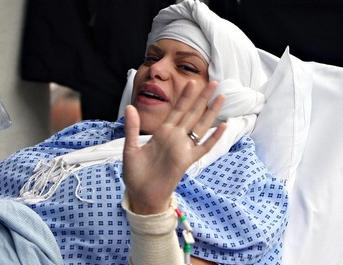 Goody died in her sleep in the early hours of this morning, her publicist Max Clifford said.

Mr Clifford said Goody’s mother Jackiey and husband Jack Tweed were at her side. A family friend, Kevin Adams, was also there.

“I think she’s going to be remembered as a young girl who has, and who will, save an awful lot of lives,” he said, referring to how her public battle with cancer has raised awareness of the disease.

He said it was “ironic” that the 27-year-old – who had two young sons Bobby, five, and Freddie, four – had died on Mother’s Day.

Mr Clifford said he hoped Goody’s family would be left in peace to grieve.

News that Jade Goody was suffering from cervical cancer led thousands more women than usual to seek information about the disease.

On the day the reality TV star was diagnosed in August 2008, Cancer Research UK witnessed 10 times the usual number of hits to its website.

Before Jade was diagnosed, the cervical cancer section of the website received around 2,000 to 3,000 hits each day.

On the day of her diagnosis, this jumped to 32,000 and visitor numbers have been two to three times higher than usual ever since.